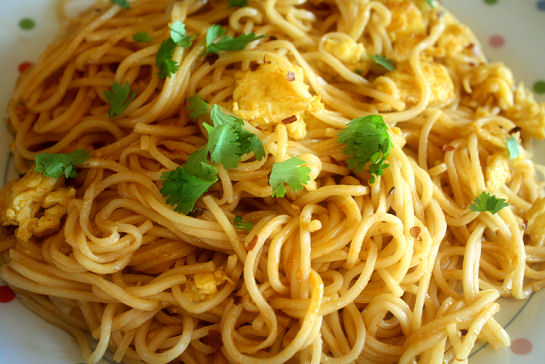 I wanted to share a great recipe from one of my favorite blogs, Budget Bytes. Budget Bytes not only has great recipes accompanied by step by step pictures, but also breaks down the estimated price for the recipe. It's great for cheap-os like me or anyone trying to budget. I've tried a few recipes, including the hummus pizza and the freezer-friendly black bean quesadillas, but nothing beats these noodles. I've made some changes to the recipe, but I've tried it strictly following the recipe and it was still really delicious.

1.Cook noodles according to package. Strain and set aside.
2. Prepare sauce by mixing together brown sugar, siracha, and peanut butter.
3. Heat butter in a saute pan and add eggs, gently move around until eggs are scrambled.
4. Turn saute pan on low, add the cooked noodles and sauce and stir to incorporate everything. Let cook until the sauce is sufficiently absorbed, it shouldn't take more than a minute.
5. Divide into portions and add a nice amount of fresh cilantro on top and red pepper flakes according to how spicy you want it.

Notes: you can easily use spaghetti or linguini if you don't have lo mein noodles, but I would suggest to over cook them slightly, as lo mein noodles are softer than pasta. I've made it with spaghetti and it was still really good, but we prefer the lo mein.  This amount SHOULD feed 3-4, but honestly I normally use this for two really large portions because we're little piggies. The original recipe called for two tablespoons of butter, and while that sounds delicious, I just couldn't bear putting that much butter in  knowing that I'll be eating half of it. I think the addition of peanut butter makes up for the reduced amount of butter. It doesn't overwhelm the dish, it just adds a little bit of flavor. One thing you don't want to skimp on, though, is fresh cilantro, it really makes the dish! Throw in some tofu, shredded carrots, cabbage, or whatever else and you have a really easy pad thai type dish.
at 8:47 PM