Oh, cruel world. A life extinguished so young! I went out to discover that the green bell pepper plant that I was excited about has lost it's first pepper before it matured.

It was a sad day. 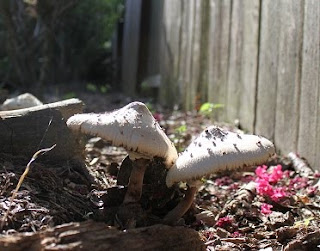 Mushrooms have been popping up everywhere! There are some big ones near the fence, and tiny ones in the garden.

I made this small quilt a couple weeks ago with a fat quarter pack I found at Hobby Lobby. The red mushroom fabric was too adorable to pass up. It measures 36.5"x44.5" and has pink flannel for the backing and satin for the binding. That was a major pain, but you can't notice my mistakes from these pictures so I won't bother bringing them up.

Houston, we have squash

I can't believe it's only been a month since I planted the garden. I'm especially impressed with how quickly the summer squash has grown.

This was taken exactly one month ago..

and look what has already started to appear!

I am beyond excited about this. In the last two weeks the plant has exploded. The past couple days have been really rainy, so I haven't been out to check the garden, and last night I was totally surprised when I discovered squash. There are two babies on one of the plants but tons of blossoms on both. I've been looking through the Vegan Yum Yum blog and it's making me really excited about cooking these guys up.
I would have more pictures of the bigger squash that's growing, but my dog decided he wanted to poop RIGHT in front of the plant, so I had to maneuver around it, and all of the pictures of it came out crummy. Thanks a lot, Rocky.

Also, every time I go out to the garden the neighbor's dog constantly yaps at me through the fence. I got a good look at the little booger today.

This is why I'm a cat person.

We also put up a trellis type thing for the cucumbers yesterday. They were starting to attack anything they could, so hopefully this extra piece of railing will be able to keep them in line. As I was putting it up, I noticed that one of the cucumber plants had a vine that had POKED THROUGH a leaf on the other cucumber plant, and had curled itself all around that leaf.
at 5:48 PM 1 comment:

peaches come in a can, they were put there by a man

Well, not these peaches!!
I am so happy about how this pie turned out. Normally my pies look ugly, with a mashed crust that's too dark, and the inside is mushy and bubbles out all over the place. I've just never been able to make an all around GOOD pie before, so I was nervous when I first attempted this peach pie.
You see, my dad LOVES peaches, and he especially loves peach pie. Originally I was going to use canned peaches, but I figured I'd go all out and buy fresh ones, despite the extra effort and money.

Look at that baby. Delectable!

5 cups of peaches, peeled and sliced
lemon juice to squeeze over the peaches while preparing the pie shell
1/2 cup flour
1 cup white sugar
some cinnamon and nutmeg. I didn't really measure it.
a dash of salt (sorry! I don't measure unless it's something that's going to affect the baking)
butter to dot the top
1 egg, beaten, for an egg wash.


I preheated the oven to 450 and combined the flour, sugar, spices and salt and mixed, then poured it over the peaches to cover them. It got pretty gloppy, so I may have had too much dry ingredients.
I used a 9" pie pan (from Pioneer Pies, a favorite restaurant from Oklahoma) and poked holes in the bottom crust, plopped the filling in and put small pieces of butter on top before putting on the lattice top. I then rolled the excess dough from the bottom up over the edges of the lattice and crimped. It worked pretty well! I put an egg wash over every exposed piece of pie crust and stuck it in the oven for 10 minutes, then turned it down to 350 to bake another 30 minutes.

My only problem with this is that there was too much liquid. I think this may have been because of the extra dry ingredients the subsequent glopiness of the filling before baking. I would try to decrease that next time I bake this. Other than that it tasted really good! It didn't have that thick syrupy filling that grocery store peach pies have. It wasn't overly sweet, and the cinnamon and nutmeg really gave it a good flavor. This pie was definitely worth the effort, the title of this post, however, was not, as I now have that Presidents of the United States of America song Peaches stuck in my head.
at 4:11 PM 1 comment: